Louisiana Super Plant program began in 2009 and is an marketing and educational program from the LSU AgCenter that showcases plants that perform well in Louisiana.  To become a Super Plant the plant goes through at least 2 years of testing in north and south Louisiana to ensure they are hardy across the state.  The Super Plants that we currently offer are:

Recently the 2016 St. Tammany Parish Louisiana Master Gardener training class participants took a field trip to the nursery.  While here they got a behind the scenes tour of the facility and information on the history of camellias and propagation techniques.

We had a great spring garden festival season.  It was a blast getting to see and help so many garden enthusiast.  We look forward to seeing everyone at our summer festival and fall garden shows. 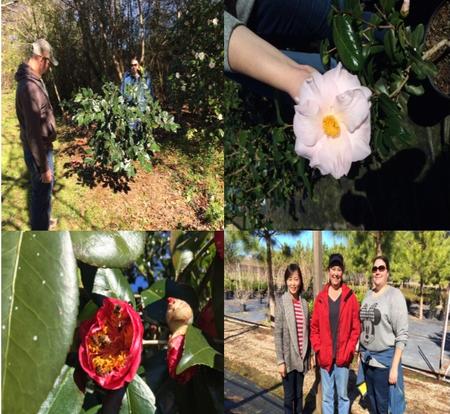 We are now offering a new summer crop!  From buddleia, gaura, milkweek, lantana and many more color options that attract butterflies and hummingbirds while adding a splash to your yard.  Stop by to check out what we now have to offer! 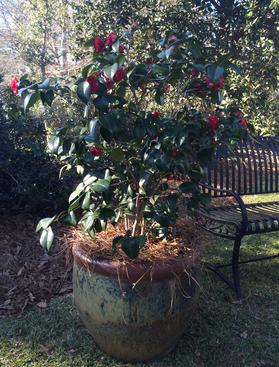 Growing Your Camellia in a Container

Camellias can make great container plants.  The key to successfully growing a camellia in a container is selecting the appropriate container.  It should not be much larger than the plant needs and must have drainage holes in the bottom.  Start by placing a layer of gravel in the bottom of the container to help with drainage.  Then follow normal camellia planting guidelines.  Camellias are hardy enough so you will not have to worry about protecting them from the weather and they offer blooms for months!

We have begun a monthly newsletter.  Each newsletter will contain camellia care information, fact, events at the nursery and will showcase a camellia each month.  To join our email list please email Paige at paige@mizellscamelliahillnurserys.com.

Recently Dr. Yan Chen, Associate Professor of Ornamental Horticulture, and Jason Stagg, Instructor, from the LSU AgCenter's Hammond Research Station visited and toured the nursery.  They were here in search of some Camellia Sinensis plants for their young tea collection.  We were able to provide them with some Red Leaf Tea plants.  While here they enjoyed all of the Japonica's in bloom along with going through the Camellia walks on the grounds.  For more information about the Hammond Research Station and all they have to offer ​follow this link!

Latest News and Updates From the Nursery​

January 30-31 we held our 2nd Annual Open House.  We would like to thank all of those who took the time out of their weekend to come spend it with us!

*The name camellia is taken from the Latinized name of Rev. Georg Kamel, a Moravarian-born Jesuit lay brother.  Carl Linnaeus chose his name in 1753 for the genus to honor Kamel's contribution to botany.

*The state flower of the state of Alabama is the camellia, in 1959 it replaced goldenrod as the official flower.  No specific camellia is listed, so it encumbers all camellias as the flower.

*Camellia bushes can live up to 100 to 200 years, although, the oldest living camellia planted in 1347 can be found still alive today in China's Panlong Monastary.

​*Camellia oils from c. oleifera is used to nurture hair and in cosmetics in Japan.

*The tallest camellia in the world is 20 meters, or 65 1/2 foot tall.  It is over 400 years old and was planted in the courtyard of Taoist Ling Guan Temple during the Ming Dynasty.

*In the language of flowers, camellia stands for adoration, devotion and loveliness.  White blooms signify true excellence and faithfulness, while red symbolizes beauty.

*Leaves of camellias are used in the treatment of asthma and cardiovascular disorders in Asia.

*Tea oil made from camellia seeds is a popular and essential cooking oil for millions of people, especially those that live in southern China.

*Coco Chanel was well known for wearing a white camellia.

*Ralph Peer, the music industry pioneer often credited as the father of country music, was a former president of the American Camellia Society.

*The seeds of c. oleifera are used for extracting oil.  It is known as tea oil and is used for seasoning and cooking.

*Tea is the most widely consumed beverage in the world after water.  In the USA, the south and Northeast have the greatest concentration of tea drinkers.

*Over 1.42 million pounds of tea are consumed in the U.S. every day.

*Black tea is the most common tea beverage in the United States, the U.K. and Europe.  Green tea is popular in Japan and China.  Oolong and white tea are, in general, less popular.

*The United Kingdom drinks about 165 million cups of tea a day, or 62 billion cups a year.

*The tea plant, camellia sinensis, has a large genome with three million base pairs, more than four times the size of coffee.

*C. Reticulata 'Captain Rawes' was the first cultivar of reticulata to be brought out of China.